The Chinese diplomats took the opportunity to put in the spotlight the incompetence of the American government and to advertise Beijing as a global superpower with greater responsibility. 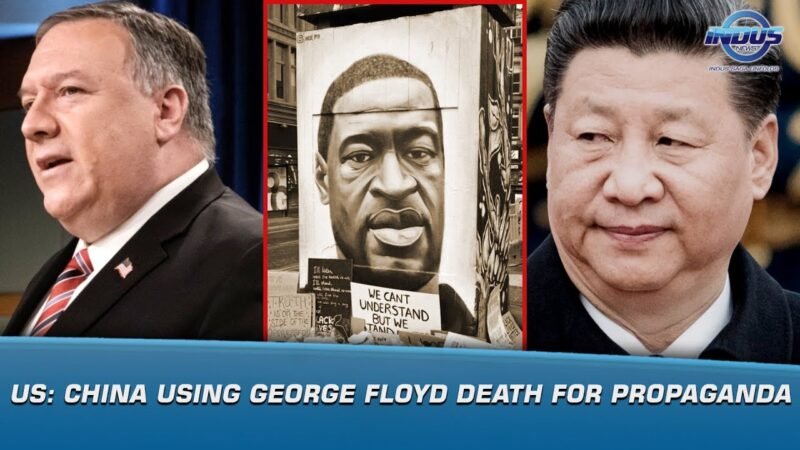 China is taking a victory dance over unrest in the US following George Floyd’s death, a few months after racism against blacks in China had reared its ugly head. With the Coronavirus devouring the world and accusations of “China lied, people died,” whisking all over the media. It is appalling that Beijing has not thrown away the opportunity to smug and gloat at the expense of other people’s misery in the US.

All media houses were criticizing the Chinese treatment of blacks in Beijing; yet, now their leaders are acting holier than thou. Civil unrest in the United States is attracting attention across the globe, but China has a unique interest to watch from afar. While anti-racism movements spread across the United States, China has exploited the riots to target Washington for backing pro-democracy protests in Hong Kong the previous year.

The invisible fight between China and the United States is indeed crystal clear. The US protests have been widely covered by the Chinese media. They have not forgotten to highlight America’s chaotic scenes and intended racial police violence, claiming that China is more socially stable. Chinese ambassadors sought to paint Beijing as the leading nation willing to take responsibility for solidarity with other nations by criticizing race inequality and unfairness in the US on global platforms.

The Chinese diplomats took the opportunity to put in the spotlight the incompetence of the American government and to advertise Beijing as a global superpower with greater responsibility. Ms. Kokas explains this as maintaining the state’s pandemic warfare policy – if America struggles, self-righteous China is ready to help. Chinese diplomats retweeted UN and African Union authorities’ tweets, criticizing US racial prejudice and police abuse. Hua Chunying, the Chinese Foreign Minister’s spokesperson, tweeted, “I can’t breathe,” with a screen-cap of the US state department speaker, Morgan Ortagus’, the original post about the China-Hong Kong relationship.

However, Hua was condemned on Twitter as she posted “all lives matter,” an anti-black racism slogan she used to discredit the movement of “black lives matter.” Meanwhile, reports of discrimination against African citizens and forced isolation in the southern Chinese city of Guangzhou amid the Coronavirus epidemic are increasing. In the far-western Xinjiang area, China is also charged with detaining hundreds of thousands of Uighurs and other Muslim minorities. Complacent Beijing has not formally apologized for the maltreatment of people but only stated they were some “misunderstandings.”

Who said tit-for-tat was a fair game? The Chinese State media outlet, Xinhua, defined the US civilian riots as “Pelosi’s beautiful landscape” relating to the remark last summer by US House Speaker, Nancy Pelosi, about the protestations in Hong Kong as “a beautiful sight to behold.” The editor-in-chief of the State Media, Global Times, Hu Xijin, said now the American politicians could “enjoy the sight from their windows,” referring to George Floyd’s death current protests. Beijing has criticized the American politicians, like Ms. Pelosi, to have “glorified violence” by Hong Kong protesters who are classified by China as “riot-signed terrorists.”

Rallies crippled Hong Kong in 2019, triggering Beijing only two weeks before its annual celebration of the Tiananmen Square repression to enforce new national security legislation on the territory in May. According to Aynne Kokas, a senior faculty fellow at the University of Virginia at Miller Center, Public Affairs, the US and China are fighting with high rates of national instability caused by the virus and political issues.

“Now is a key moment through which China can leverage the lack of stability in the US, to promote its own national security goals more efficiently,” she says.

Hong Kong’s leader, Carrie Lam, Criticizes the US for being ‘Double Standard’

Leaders in China and Hong Kong have also criticized America in its reaction to civil riots by employing ‘double standards.’

“You know there are riots in the United States, and we see how local governments react,” said Hong Kong’s leader Carrie Lam.

Several Chinese social media users shared similar opinions and labeled America as “a double-standard nation.” The Chinese state media noticed reports of excessive usage of police power in the US demonstrations, discrediting Washington’s role in the preservation of democracy and rights. In one instance, the Chinese Central Television state broadcaster revealed Americans were pepper-sprayed, and a rubber bullet temporarily blinded a freelancing photographer while attempting to cover the demonstrations.

“It’s powerful because they are not making it up,” Prof Repnikova says, but she points out that Chinese state media have cherry-picked the more peaceful pictures of Hong Kong police and the most violent ones from the US.

There is no denying that US demonstrations have created a hot debate on Weibo-one of the most famous topics on the internet this week. About 25 billion views have been obtained from similar blogs. Several Weibo updates “congratulate” the US for civil strife and drive them back to their support of the protests in Hong Kong. And the idea that Washington is promoting the Hong Kong demonstrations is now circulating in Beijing and its news agencies, have termed the situation in the US as a “black hand” of turmoil behind the riots.

Ms. Kokas says: “Chinese state media don’t have to craft a narrative. They can just talk about the objective events that have happened in Washington, DC, which undermines the principle of freedom of speech and assembly.”

She adds the USA is sarcastic about Hong Kong’s constitutional freedom, which now appears “very hollow when military helicopters fly over Washington DC.”

“This is trampling on human rights! Democracy in the US came to an end at this exact moment,” a Weibo user noted and got thousands of likes.

China is No Better

Several other Chinese also think about their country’s flaws. One Weibo user writes about being “jealous of the freedom of speech” in the United States, as rallies against governance in China are always actively suppressed. In China, press independence is condemned. On China’s social media platform, Weibo, people view America’s democratic values at stake as the US police sparked tear gas on peaceful demonstrators, and the army was deployed to quench the demonstrations.

“Nothing much has changed after generations of fights. I hope this time will yield better results,” a comment reads.

Several other posts implored the Chinese media publications to convey the same level of commitment to racial injustices in Chinese police. In the mass media, China’s common perception has also been an unreliable portal. The impact of its information bubble is amplified by communication repression in the region. While the ties between the United States and China have deteriorated owing to the demonstrations in Hong Kong, trade tensions, and the Coronavirus pandemic, anti-American feelings in China tend to be growing. Thousands of Weibo posts describe George Floyd’s demonstrations in the US as “karma” for Washington. But the state of affairs seems truly heart-wrenching to some Chinese people.

Is Ukraine on the verge of a nuclear disaster?